German educationalists seem to have invented both the main diagramming systems taken up in the UK and the USA: tables and trees.

The term ‘analysis’ may have been applied for the first time to syntax, at least in German or English, by Karl Ferdinand Becker in his 1827 Deutsche Sprachlehre (Vol 2, p.295): 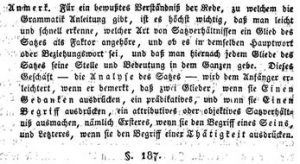 On the other hand, the terms analyse de la phrase and analyse des phrases (analysis of the sentence / of sentences) is already well established in French well before that, as can be seen from this Google N-gram. (For both German and English, the equivalent n-grams don’t start till 1880.)

Becker also may have been the first to use tables for presenting sentence structure, as in this representative example from the same book (p.381): 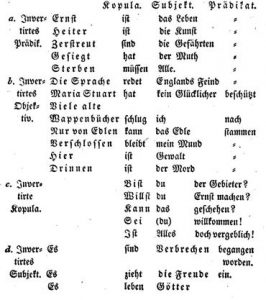 This table is significant for two reasons: 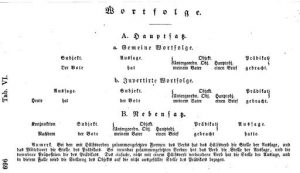 His tables seems to have been popular, as we find a very similar one in a grammar-book by a different author (Wurst, Raimund Jakob. 1852. Deutsche Sprachdenklehre. Zum Selbstunterricht in der Muttersprache, eingerichtet aund mit einer Erklärung der Gebrauchs-Methode versehen, von Wilhelm Nast.) Moreover, Becker’s ideas were very influential in America:

The first network representation for a sentence seems to have been this one, from page 102 of Lateinische Syntax für die obern Klassen gelehrter Schulen. Leipzig: Weidmann (1832), by Johann Billroth. 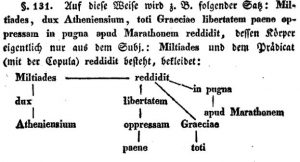 The book concerns the syntax of Latin, and the Latin example is: Miltiades, dux Atheniensium, toti Graeciae libertatem paene oppressam in pugna apud Marathonem reddidit (Miltiades, the leader of the Athenians, returned (reddidit) the liberty (which had been) almost oppressed in the battle at Marathon’). Some comments:

The first true tree was produced by Franz Kern in 1884 in opposition to the Billroth/Reed-Kellogg diagrams  (Kern, Franz. 1884. Grundriss der Deutschen Satzlehre. Berlin: Nicolaische Verlags-Buchhandlung), who saw the finite verb as the highest-ranked word. Here’s the opening paragraph of the book:

Translation: ‘The sketch of German sentence-study intended for the classes up to ‘Tertia’ (? the Gymnasium, standing beyond primary and secondary levels) which I lay out here for teachers of German differs from other books of this type especially through the fact that it starts with the word which is essential for the sentence, the finite verb. I consider this approach to be not only the one most justified scientifically but also the one which is most right practically, as it is only in relation to the finite verb that everything else in the sentence can be explored and determined. (Compare section 26.)’

The diagram gives the analysis for the German sentence: Eine stolze Krähe schmückte sich mit den ausgefallenen Federn der Pfauen. ‘A proud crow decorated itself with the fallen-out feathers of the peacocks.’ To make the diagram clearer I have redrawn it and translated the grammatical terms: 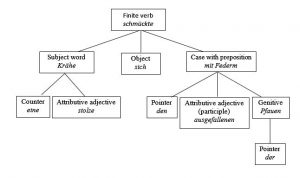 (In later diagrams he just gives the grammatical terms without the example words.)

Kern’s influence spread beyond Germany to countries including Sweden (Natanael Beckman) and Romania (H. Tiktin).  (source:Coseriu, Eugenio. 1980. Un précurseur méconnu de la syntaxe stucturale: H. Tiktin. In Jean Bingen, André Coupez & Francine Mawet (eds.), Recherches de Linguistique. Hommages a Maurice Leroy, 48–62. Brussels: Éditions de l’Université de Bruxelles.) It’s possible that it inspired the much later (1959) stemmas of Lucien Tesnière (who had ample opportunity to learn about Kern’s diagrams while he was studying Germanic languages in Leipzig just before 1914, though he doesn’t mention Kern in his main book, the Eléments de Syntaxe Structurale). The most obvious difference is the treatment of the preposition (mit, ‘with’) as a marker of the noun with similar status to the latter’s inflectional case.

In 1900, Wilhelm Wundt introduced a completely different analytical notation which inspired Leonard Bloomfield to invent Immediate Constituent Analysis. Here’s an elementary diagram for simple sentences from page 329 of his Völkerpsychologie, eine Untersuchung der Entwicklungsgesetze von Sprache, Mythus, und Sitte. Erster Band: Die Sprache. Zweiter Teil. (Second edition 1904).  He mentions Kern once (page 230), only to reject his approach because it presupposes the notion ‘finite verb’ (missing e.g. in Chinese). In this diagram, G = Gesamtvorstellung, and A and B are the subject and predicate.