The history of English teaching in England

This site is intended to bring together a rather haphazard collection of documents to do with the history of the subject called ‘English’ in our education system. If you can suggest or offer other documents, please contact me. Another page brings together various systems that have been used for ‘diagramming’ sentence structure in different countries.

The dominant figure in England at the turn of the twentieth century had been Henry Sweet (1845-1912). Sweet was essentially a philologist, concerned with the understanding of texts (hermeneutics) and textual criticism. He offered striking and original insights into the structure of English, as well as helping to lay the foundations for the scientific study of language in general, and phonetics in particular. Unlike some of his contemporaries (and cf. Daunt, below) he believed that the study of language should begin with one’s own native speech. In the teaching world, Sonnenschein probably occupied at least as prominent a place in the academic consciousness as Sweet did, especially as far as the teaching of grammar in schools was concerned. Sonnenschein had founded the Birmingham Grammatical Society in 1885 with the purpose of promoting simplicity and uniformity of terminology in the teaching of the ‘school’ languages, and of encouraging grammatical research among teachers. This work was to develop in two major directions. The first issued in a series of books covering the most important languages taught in schools, which were uniform in  classification and terminology, scope, size and type. This series – the ‘Parallel Grammar Series’ (PGS) – covered eight
languages, each with its own printed grammar, and some with supplementary readers as well.

The second area into which Sonnenschein channelled his energies was the Joint Committee on Grammatical Terminology (JCGT), – the political arm, it might be said, of the practical work being done through the PGS. The committee published its recommendations in 1911 (Anon 1911). There was little danger of them being overlooked: with seemingly tireless energy Sonnenschein forged links not only with eight different associations in Britain, who were persuaded to nominate members for the Committee, but also with like-minded colleagues in the United States, Germany, Austria and France. However, for all this activity Sonnenschein’s campaign came to little. This was in part because of the opposition of no less a figure than Otto Jespersen, who took a different view on both theory and  terminology (Walmsley 1989).

For more discussion of the pursuit of a unified grammatical terminology, and the conflict between Sonnenschein and Jespersen and its consequences, see this page:

The early roots of English teaching 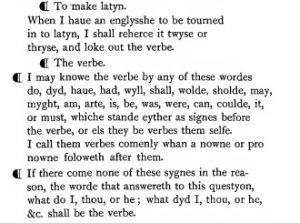