Words combine to make phrases, and phrases are one of the basic patterns out of which we build sentences.

Phrases can have many different functions in a sentence. They are used as subjects, objects, complements, modifiers, or adverbials.

Understanding phrasal patterns helps us to discuss and explain the effects in our own and others’ writing. In the sentence:

A phrase is an expansion of one of the words inside it, which is called its head. For example, creatures is the head of the strange green creatures with bobbing heads.

The words that expand the head of a phrase are its ‘expanders’, which are generally the head’s modifiers; for example, green modifies creatures. All this means is that green makes the meaning of creatures more precise – instead of meaning simply ‘creatures’, it means ‘green creatures’. (For an expander which is not a modifier see Prepositional phrases.)

There is a useful notation for showing heads and their expanders, in which the head is written higher than the modifiers, showing that it is the ‘boss’ and the expanders are its assistants, brought in to make the message more precise.

How long is a phrase?

A phrase can be two words long:

Sometimes you will even see a single word referred to as a phrase. Or a phrase can be much longer:

Longer phrases are like Russian dolls – they contain a number of shorter phrases:

The phrases whose heads are by and over are prepositional phrases and will be explained below.

The other notation shows the same structure in a different way: 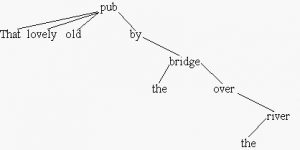 These diagrams are both useful in revealing the way in which the larger phrase is built out of smaller parts, each of which helps to expand a word which is before or after it:

the bridge over the river

by the bridge over the river

that lovely old pub by the bridge over the river

A noun phrase has a noun as its head. The modifiers may be:

A noun phrase does the work of a noun in a sentence.

Most sentences contain several noun phrases, which often determine the overall length and complexity of the whole sentence. This is why it’s important to be able to focus attention on the noun phrases in a text, in order to discuss their structures and how they are used.

At KS3 one main area of development with adjective phrases is likely to concern the use of prepositions and linking words (e.g. different from, conscious of, accustomed to, sufficiently big to).

Like single adverbs, they modify verbs, adjectives or adverbs. For example:

Prepositional phrases have a preposition as their head:

from eating too much

Heads and objects in prepositional phrases

In fact, the preposition sets up the meaning for the whole phrase, and the object makes it more precise. For example, behind picks out some place, and defines it in relation to something else – the fridge, Mary, the Houses of Parliament, depending on what the object may be. This is why we treat the preposition as the phrase’s head.

Think about the functions of the two preposition phrases in this sentence:

The boy from the shop is waiting at the corner

Adverbial prepositional phrases, like adverbs, modify verbs, adjectives, adverbs or prepositions, and answer the same range of questions as adverbs:

How? in a hurry, with enthusiasm

When? after the party, at midnight

Where? at the station, near London

Why? for my sake, because of the cold

Adjectival prepositional phrases, like adjectives, modify nouns: for example, they tell you which boy:

The boy in a hurry is waiting over there.

The boy at the station told me.

The boy from London lives here.

The boy with red hair is called Ginger.

The boy behind the shed is smoking.

As some of these examples show, the same phrase can be adjectival or adverbial, depending on its function in the sentence