There are many ways in which the same combination of facts can be ‘packaged’ in sentences. Pupils need to be aware of some of the main options for varying the structures within a sentence, for example by using subordinate clauses and passives. These options allow information to ‘flow’ through a sentence so that it is clear which parts are most important. They also improve the flow of information within the whole text, because they help the writer to integrate each sentence with those on either side of it.

Understanding the effects of different sentence structures on meaning is important for KS3 pupils not only as writers and speakers, but also as readers and listeners.

This unit is concerned with signalling the relative importance of different parts of the total message.

There are two general grammatical principles concerned with importance:

In general, the more like a complete sentence a structure is, the more importance it receives in the sentence.

For example, a simple message might consist of two facts:

The speaker or writer has three options:

In spite of the feeling of discouragement, she was working

Although she was working she was feeling discouraged.

Although working she was feeling discouraged.

In spite of working, she was feeling discouraged

While working, she was feeling discouraged.

The general principle is that sentence structure reflects importance.

When we write, we try to establish links in the reader’s mind as quickly as possible. So the context – what the reader already has in mind – determines the most effective word order.

For example, suppose the reader already knows that Mary had been hard at work for hours. In that case it would be natural to continue the story like this:

Mary had been working for hours. She was working in spite of feeling tired.

It would be odd, and unhelpful, to mention the tiredness first:

Mary had been working for hours. In spite of feeling tired she was working.

On the other hand if the tiredness is what the reader already knows, the reverse order is preferable:

Mary felt exhausted after a bad night. In spite of feeling tired she was working.

Mary felt exhausted after a bad night. She was working in spite of feeling tired.

This means that what comes first tends to be information that we know already, so it is less important than what comes later.

Some special patterns for reorganising clauses

Ordinary main clauses and subordinate clauses offer a convenient range of different solutions to the problems of signalling importance, but there is also a range of special patterns that expand the range of possibilities even further.

There is a large cat in your garden.

There takes over the role of subject from the basic subject a large cat, so a large cat occurs later, and has greater importance than it would have in the sentence:

A large cat is in your garden.

In your garden is a large cat.

In this pattern the basic subject is delayed till the end of the sentence where it can have greater importance. However another element has to move out of that position, so the two elements swap places.

Only a few verbs allow subject delay, with be by far the most common, so the other element is usually a complement of be. Here are two more examples:

Lying in the sunshine were two large cats.

At the end of the field stands a stately oak tree.

The position of the new first element also allows it to link easily to what has gone before, so it is often anaphoric:

At last I found the entrance. Lying on top of it was a large stone.

Front shifting is best explained by an example:

The emphasis in this front shifted example is on forget, and remember. The effect of this word order is noticeably different from the more expected:

You forget some things. You always remember other things.

Front-shifting reduces the importance of the front-shifted element, which then provides a context for the rest of the clause and may link back to the preceding sentence.

It is very common with prepositional and adverbial phrases:

At the moment, I’m hoping to get a bus back.

Later on, she’s coming round.

It’s also possible, though less common, if a noun clause is the object:

Our dog is being chased by your cat.

Passive verbs allow their basic object (our dog) to become their subject. 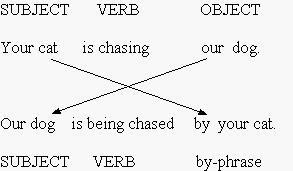 This change has several effects on the flow of information:

Passive verbs make the style ‘impersonal’ only in the latter case; if their active subjects are expressed they are no more impersonal than active verbs.