Sentence-diagramming systems used in the USA

In 1831, James Brown wrote The American Grammar, in which he proposed a method for analysing sentences (though he used the terms ‘construing’ and ‘scanning’, respectively for multi-clause and single-clause sentences) using brackets for construing and numbers for scanning:

In 1836, Frederick Barnard, a distinguished and brilliant but deaf polymath, scientist and educator, wrote “Analytic grammar, with symbolic illustrations” for deaf students, with a diagramming system in which each word has a symbol which shows its potential links to other words. For instance (page 28):

By combining these symbols his system distinguished sentence patterns like these (in an exercise on synthesising sentences, page 54): 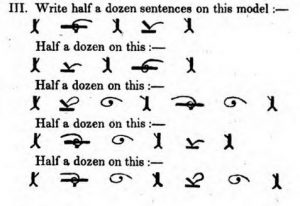 They also use horizontal braces to show word-groups equivalent to modern ‘phrases’:

In 1839, Oliver Peirce wrote The Grammar of the English Language. (New York, NY: Robinson and Franklin.) This doesn’t mention James Brown (though it often criticises Goold Brown – see below) or Barnard, but includes a number of innovations which don’t seem to have had any uptake. 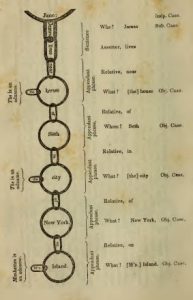 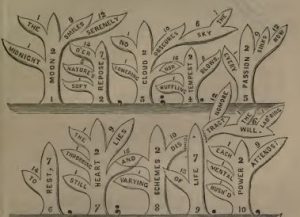 In 1847, Stephen Watkins  Clark published a method for diagramming sentences: Clark, Stephen Watkins. 1847. A Practical Grammar: In which Words, Phrases, and Sentences Are Classified According to Their Offices and Their Various Relations to One Another. Sixth edition 1851. https://ia800304.us.archive.org/10/items/apracticalgramm04clargoog/apracticalgramm04clargoog.pdf. Two excellent reviews of Clark’s work and its significance by Nicolas Mazziotta:

Here’s an example from Practical Grammar (page 17 of the 1851 sixth edition): 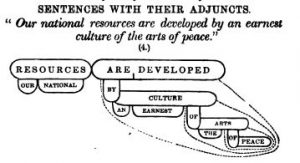 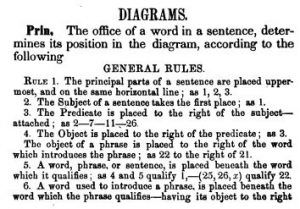 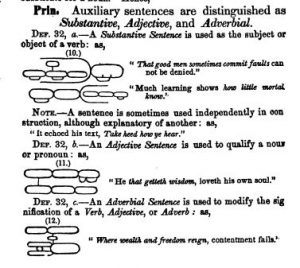 Samuel Greene’s 1848 grammar (Greene, Samuel Stillman. 1848. Greene’s analysis. A treatise on the structure of the English language; or, The analysis and classification of sentences and their component parts with illustrations and exercises, adapted to the use of schools. Philadelphia: Thomas, Cowperthwait, & Co.) is interesting for two reasons: 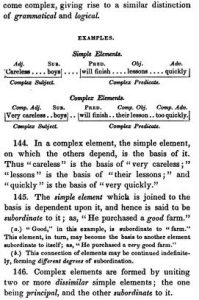 In 1877,  Alonzo Reed and Brainerd Kellogg published a system using lines instead of balloons, and even more like Billroth’s 1832 system (though this similarity is probably coincidental). 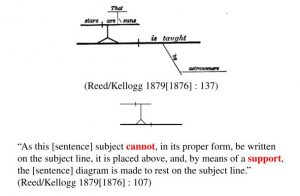 This grammar (Gauss, Charles & B.T. Hodge. 1890. A Comprehensive English Grammar for Schools, Colleges, Families and Private Students. Baltimore: Pan Publication.) is distinguished by the prominence it gives to the ‘tree’ metaphor (following Barrett 1845, above, but apparently independently of it). This is the tree (from page 330) for By chance there passed a farmer’s boy, whistling a tune in childish joy, but as an analysis of the sentence’s structure it is, of course, a disaster – much worse than Barrett’s trees. 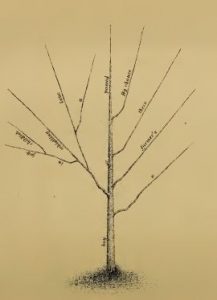